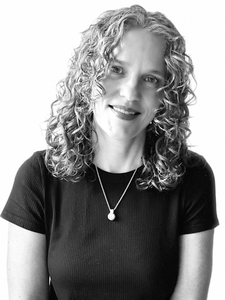 Oksana Waterfall started her art career as a commercial graphic artist in Melbourne.  Since moving to the Northern Rivers in 1993, Oksana has produced small run commercial ceramics, been a painter and worked with mixed media and drawing.  It is drawing people their stories and memories that captures her fascination and has done so for some time.
She has spent recent years exploring her Ukrainian heritage through her art practice.  Her solo exhibition at BSA Project Space, Collective Memory, takes the form of a contemporary embroidery sampler, where symbols and stories of herself and her family are interwoven with different mediums, graphic elements and embroidery.

Oksana has an Advanced Diploma of Fine Arts from Lismore TAFE (NSW), awarded in 2011.  She has been shown nationally in exhibitions including the Adelaide Perry Prize for Drawing, Jacaranda Acquisitive Drawing Award (JADA) and in the Northern Rivers Portrait Prize.  Her work has won four awards, the most recent one being the 2020 Border Art Prize.